The Restaurant at the End of the Universe, the first sequel to The Hitchhiker’s Guide to the Galaxy, replicates the creative imagination and witty observational humour of the original. But with a mission to uncover a political conspiracy at the heart of the universe, it has a noticeably dark and sinister tone. 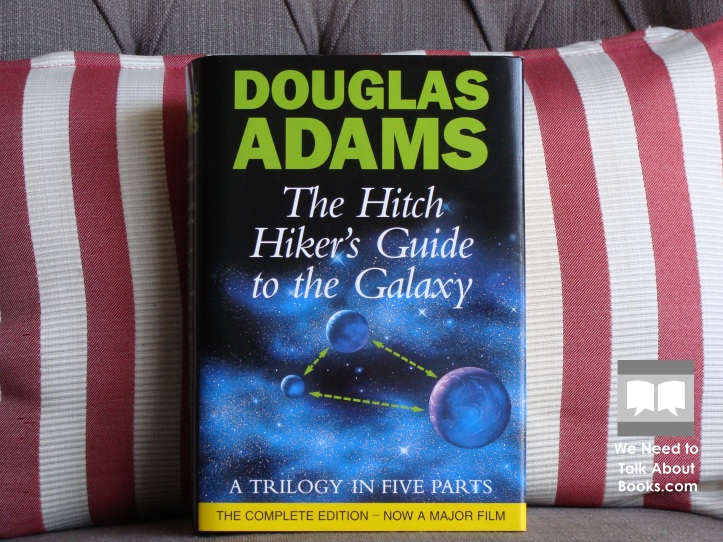 There is a theory which states that if ever anyone discovers exactly what the Universe is for and why it is here, it will instantly disappear and be replaced by something even more bizarre and inexplicable.

There is another theory which states that this has already happened.

The Heart of Gold – the ship carrying Galactic President Zaphod Beeblebrox, field reporter for the Hitchhicker’s Guide to the Galaxy Ford Prefect and the universe’s last two Earthlings, Arthur Dent and Trillian – has come under attack from a Vogon ship. The Heart of Gold is completely unable to return fire, defend itself or escape because the ship’s computer has become preoccupied with another task.

Arthur Dent has not been able to enjoy a good cup of tea since the planet Earth was destroyed and the ship’s Nutri-matic Drinks Synthesiser has not been able to deliver on its promise of producing whatever beverage a person so desires. In frustration Arthur decides to impart to the device all his knowledge on what goes into a good cup of tea – about India, China and Ceylon; about broad leaves drying in the sun; about milk and silver teapots; even about the history of the East India Company. Overwhelmed by this information, the humble device and the ship’s computer have diverted all resources – which would otherwise be used to escape the attack that is about to destroy the ship – into producing what Arthur will later admit was the best cup of tea he has ever had.

Zaphod, Ford, Arthur and Trillian barely manage to survive, but their deliverance comes with some unexpected knowledge. While seemingly impaired by self-inflicted brain damage, Zaphod has learned that his path to the Galactic Presidency was no accident but was planned with a particular goal in mind. Just not in his mind, since to have an agenda would disqualify him from becoming President. His mission, which he has barely an interest in accepting, is to discover who or what really holds all the political power in the universe.

And so this is the situation we find: a succession of Galactic Presidents who so much enjoy the fun and palaver of being in power that they very rarely notice that they’re not.

And somewhere in the shadows behind them – who?

Who can possibly rule if no one who wants to do it can be allowed to do it?

His mission to discover the most heavily guarded secret of the universe, though, is not so important that they can’t stop for refreshment. Asked to send them to the nearest restaurant, the Heart of Gold sends them over 500 billion years into the future to Milliways – the eponymous restaurant – which was the nearest restaurant in terms of space not time.

The Restaurant at the End of the Universe is one of the most extraordinary ventures in the entire history of catering.

It is built on the fragmented remains of an eventually ruined planet which is (wioll haven be) enclosed in a vast time bubble and projected forward in time to the precise moment of the End of the Universe.

This is, many would say, impossible.

There, Ford and Zaphod can indulge in Pan Galactic Gargle Blasters, the best drink in existence, while patrons enjoy the comedy of Max Quordlepleen as they count down to the big show – the end of the universe.

But Zaphod’s diversion from his mission cannot last. In order to complete his mission, Zaphod must survive fiendishly devised torture devices and a plunge into the core of a star.

The Restaurant at the End of the Universe is a worthy follow up to The Hitchhiker’s Guide to the Galaxy. The humour and imagination of the first novel is maintained with cocktails too dangerous to drink and rock bands too dangerous to listen to.

Where there is a difference is that this is a much more Zaphod-focused novel. Arthur, Ford and Trillian have mostly supporting roles here. Also, given Zaphod’s conspiratorial mission and the possible existence of a secret power hierarchy controlling the universe; he novel has a far darker and sinister tone.

What can also be said about Restaurant is that, with one eye on the evolving series, Restaurant achieves what is required of a second novel in a series. There is enough closure on some points to give the reader considerable satisfaction, while others will leave the reader eager to find out what happens next.

Next up, Life, the Universe and Everything!

For my reviews of the other Hitchhiker’s novels, see here.