Next Year in Jerusalem by John Kolchak [A Review]

A foreign superpower occupies the Holy Land. Insurgency is on the rise. Terrorists attack foreign soldiers and immigrants as well as any locals found to be complying with the occupiers or deemed to be in violation of their strict interpretation of religious laws. A new man has been appointed to govern the land and quash the insurgency but his troubles, both personal and military, become personified by two men whose paths he will cross.

One is the son of an insurgent who has grown into a young terrorist mastermind. He has successfully merged fundamentalist theology with guerrilla militarism and his growing band of fanatics spread terror amongst occupier and local alike. The other is a lost young man. He has recently learned that his real father is a foreign soldier who raped his mother. Feeling betrayed and having lost his sense of identity, he wanders the land in search of meaning and purpose to his life but increasingly finds himself preaching against the hatred, ignorance and injustice he finds instead.

The governor’s name is Pontius Pilate. The terrorist; Bar-Abbas. The preacher; Yeshua-bin-Yosif. This is Roman Judea of 2000 years ago. 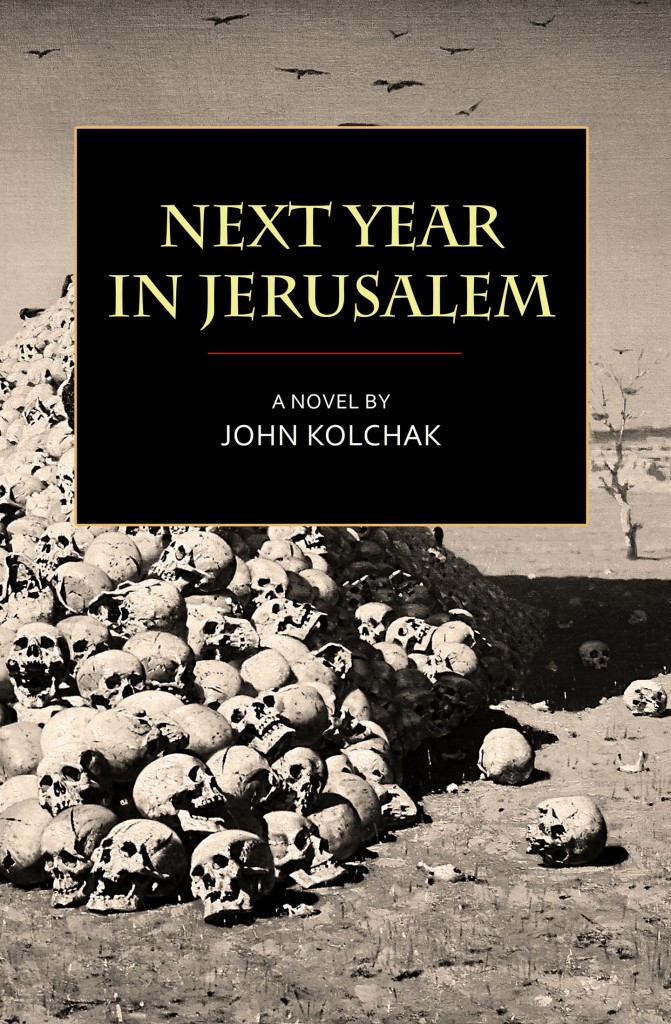 Throughout the land, bitter fruit borne of anger and indignation fell to the ground and sprouted from fertile soil. Young shoots and medium sized stalks, nurtured by the blood that soaked the earth, grew tall and strong, fierce and proud, and had only one thing on their minds—the glory of death through murder and self-sacrifice. So it came that the sand shovel in the child’s hand was soon replaced by a sword for beheadings. The saplings gained strength and from their seed more poisonous weeds took root.  Names came to define them—the Kanaim, the Zealots, but most often as the Sicarii, named for the Roman dagger, the one they stuck into the guts of Roman policeman, petty officials, Jews they considered sellouts and collaborators, and sometimes even random strangers.

Like the land itself, Next Year in Jerusalem, is an open wound. It exposes a disturbing past and asks uncomfortable questions that otherwise lie hidden beneath the surface. I don’t want to give away too much of the plot. Suffice to say it is provocative.

Roman Judea in Jesus’ time is an ideal time and place for many of the themes the novel explores. At this early stage in the Pax Romana period, the Romans sought stability in their diverse empire through cosmopolitanism, public works and a degree of delegation to local governance. In religious terms this meant a degree of tolerance and accommodationism with one important condition – observance of the Emperor’s personality cult. Across most of the empire, this was acceptable enough, but in Judea it was a call to arms.

The cursed aqueduct. Their damn construction projects. They try to ‘win us over’ and as always, they commit an atrocity! How can the people not see it? See their hypocrisy? And they call us terrorists? When Caesar is the biggest terrorist in the world?

Monotheisms have an inherent difficulty with religious tolerance since a sole God will inevitably be a jealous God who will not abide the worship of other deities. The Romans did not appreciate this difference in a world still largely dominated by polytheisms. It was only after Jesus’ time, after a series of large Jewish revolts, that the Jews won their religious independence and were exempt from observing the Roman state religion. The issues of foreign occupation, national independence, religious conformity and the murky line between freedom fighters and terrorists have a presence in the novel.

Inevitably, the reader’s mind is drawn to comparison with more recent events such as the invasion of Iraq, Israeli settlement and the rise of ISIS. It is a comparison author John Kolchak makes explicit; the Emperor refers to the Roman response to Jewish insurgency as a ‘war on terror’ and the omniscient narrator makes references to events much closer to our time. Kolchak also does not dilute the horrors of what life was like in that environment, which forces the reader to consider why such circumstances provide such fertile ground for certain ideas.

Since September 11 2001, the West has been locked in a debate over whether there is a link between religion and terrorism. If I may generalise, the Right seems convinced there is such a link, but only for one religion, while the Left is equally convinced that there is no such link. As long as these two irreconcilable views dominate, it is difficult to see any other position getting much voice.

The novel does not take either side, or necessarily any other, but appreciates the nuance to the problem. Bar-Abbas is a violent sociopath with little empathy, who wishes to build a legend around himself that will outlive him. But it can’t be said that he is merely exploiting or perverting religion for these aims; instead each feeds the other. His attacks on his fellow Jews for not being observant enough betray the direction given to his violence by his literal interpretation of sacred texts. For a sociopath to build a following, as he has, also requires a creed that is sympathetic to his cause and about more than just him. Fortunately, he has no need to invent one.

Alternatively, Yeshua has no great ambition for himself, he is troubled with doubt and his empathy for the suffering of others often overwhelms him. His difficulty is in trying to reconcile his message of peace and love with the teachings that came before him. In this land with its many poor, foreign rule, frequent violence and absence of justice, there are many eager to hear any message of hope. But Yeshua is no philosopher or fundamentalist; his message is inconsistent, amateur and naïve, and this is a land with no shortage of ‘messiahs’. Neither is he capable of choosing heresy; of completely severing his teaching from religious orthodoxy and declaring his path a new religion. That is a choice for those who preserve his legacy after he is gone to make.

Yeshua walked among the people. He would speak and sometimes the people would listen. What did he say?

The villagers and his own followers would ask him questions and he would answer, himself not knowing where the answers came from, not knowing whether what he said made sense. The seekers sought, but not within themselves. They sought meaning and they believed Yeshua knew a little truth which had always evaded them, and thus they followed him.

The parts of the novel I enjoyed the most were the ones focused on Pontius Pilate. The Pilate of Next Year in Jerusalem is a depressed, alcoholic, middle-aged man plagued by philosophical questions. A military man who made his career along the Germania frontier, his posting as a provincial governor, a prefect, is everything he could have hoped for yet he finds himself miserable. Lacking fulfillment, Pilate drinks constantly and broods alone; contemplating the problems of perception, the nature of reality, the meaning of life and the sources of happiness.

Pilate and Claudia were childless, but even children aren’t an insurance against oblivion and eternal disappearance, against being forever forgotten, against being nary but a soap bubble that pops and sighs out in the vastness of the universe. How can a man become immortal?  How can one leave something for people to forever remember him by? That was the beast scratching at his soul, the monster under his bed, his flightless bird on a string.

For myself, one of the major themes is the relationship between history and myth. One example from the novel are the lives of Bar-Abbas and Yeshua. It is Bar-Abbas who is smuggled into Egypt as a child when his terrorist father is killed and it is Bar-Abbas who has an irrational rant against a fig tree for not producing fruit out of season. Alternatively, it is Yeshua who is remembered for his encounters with a blind man, with a leper and for confronting a money-changer in the Temple. The implication being that the orthodox version of the Jesus story is, in Next Year in Jerusalem, a mixture of the lives of two very different men. I call it a major theme as the novel contains much more to potentially discuss on myth and history, but I will leave it here for other readers.

A casual glance at reviews on Goodreads suggests this novel has had divergent reviews with a lot of five-stars and a lot of one-stars! The one-stars I dare say are mostly those who would never had liked this novel and probably would not have given it a chance if they knew in advance what it contained. From their perspective, this novel tampers with something profoundly sacred, something unquestionable and unalterable, for which they have no room for flexibility.

I do not have such issues myself, but in one sense I do sympathise as the novel does contain a couple of things that did irk me slightly. In particular, the modern references, particularly by the omniscient narrator, and a few moments when the novel detours, not just the traditional story, but from historical consensus as well. That being said, from a story-telling point of view, I understand the reasons for them and they are probably not issues for most readers.

It is easy to understand why the story of Jesus is one that continues to attract writers. There is the appeal of the story itself that provides much inspiration. There are the gaps, inconsistencies, ambiguities and unanswered questions that lend so much potential for reimagining and reinterpreting. And, there is the enormous cultural impact it has had and continues to have, for better or worse, that makes us wonder what might have been if the story was even slightly different.

The obvious example of a literary reimagining is Kazantzakis’ The Last Temptation of Christ, but there is also Pullman’s The Good Man Jesus and the Scoundrel Christ, the novels of Pär Lagerkvist and several more. I can’t say I have read any, apart from Bulgakov’s The Master and Margarita, which contains a subplot of Pilate and Christ. I imagine there will only be more as more people realise how much of the origins of Christianity are ultimately unknowable, how much the story continues to hold influence and how much the story is malleable to contemporary issues. Next Year in Jerusalem is a provocative novel that makes use of all of these factors.

If you are intrigued by this novel, stay tuned – I will be posting an interview I had with the author, John Kolchak, tomorrow!

Note – author John Kolchak contacted me and provided me with a copy of his novel, Next Year in Jerusalem, in exchange for an independent review.