A Fine Balance by Rohinton Mistry [A Review]

In mid-70’s India, in an unnamed city by the sea, four unlikely characters come together, each striving to make a better life for themselves. 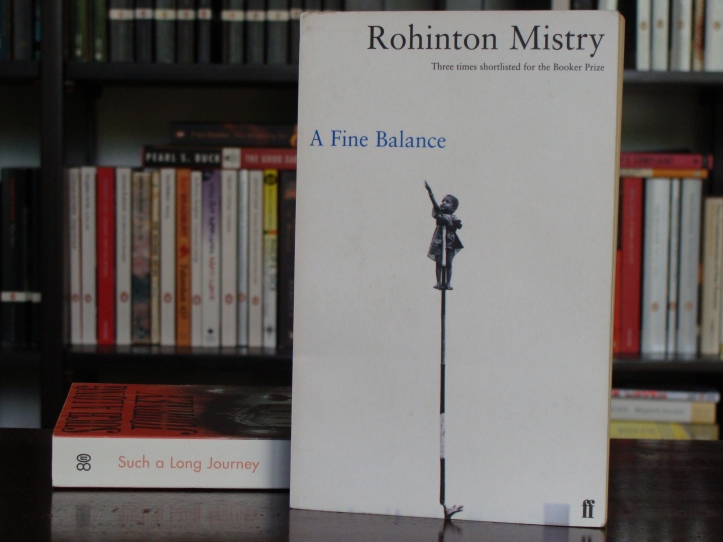 Dina Dalal is losing her grasp on her financial independence. A middle-aged widow, what independence she does have was hard-won. After the death of her father, she was treated like a domestic servant by her tyrannical older brother who sacrificed her education and sought only to marry her off to a propitious match as soon as one could be found. The following years contained few escapes to happiness but tragedy was always close behind.

Tailoring gave her self-sufficiency for a time, but she could not fully escape to a higher level of financial independence. As the years go by, her eyesight begins to fail and her independence remains in the balance. Perhaps the two tailors she has hired to complete orders from an export company will prevent her from having to return to depend on her brother.

Tailors Ishvar and his nephew Omprakash ‘Om’ Darji have come to the big city in search of work and accept an offer from Dina to sew under her supervision in her flat. Ishvar and Om’s family story is one of unconscionable tragedy. They originate from a small village where their family belong to the chamaar caste, an untouchable caste comprising leather workers, tanners and cobblers. Their family history is one of inescapable prejudice, violence, rape, torture and murder that they have survived by humiliation and forbearance.

It was an act of bravery, desperation and blasphemy on the part of the previous generation to break caste and adopt tailoring as their family’s future. For all its rewards it was also a perilous journey, drawing the ire of old enemies, from which they have not yet fully escaped. Threats now also arrive in the form of progress as mass-produced, ready-fit clothes potentially make their chosen trade obsolete. It is their hope that the city offers the prospect of quick money with which they can return to their village and reinvigorate their trade in their traditional home.

But the income from the tailoring alone will not be enough to help Dina make ends meet. On the suggestion of a friend, she agrees to let her spare room to a student. She has been assured that Maneck Kohlah is a respectable young man who wants for little but a quiet place to study and sleep and a couple of square meals a day.

Unlike the others, Maneck comes from a family that is used to wealth. His father, Farokh, inherited farms, orchards and factories – all of which ended up on the wrong side of the border when India was partitioned into India and Pakistan.

“A foreigner drew a magic line on a map and called it the new border; it became a river of blood upon the Earth. And the orchards, fields, factories, businesses, all on the wrong side of that line, vanished with a wave of the pale conjuror’s wand.”

It left the Kohlah family with a general store, the backbone of which is a soft drink made from a secret family recipe. The store’s position as a centre of the local community in their mountainous region gives the family pride of place.

But the isolated community provides little educational opportunity for Maneck. Their mountain paradise is also under threat from the encroaching outside world. Roads and development are bringing new competition for the small family business and, much to his unhappiness, Maneck has been sent to the city to study air-conditioning and refrigeration repair which his father believes offers him a better chance at a prosperous future than any in their ancestral home.

These four people, who in normal circumstances would not have much to do with each other now find themselves confined to very intimate surroundings. Initially, they are all very wary and distrustful of each other coming from different regions, religions and socioeconomic classes as they do. The baggage they have all brought with them from their pasts also play a part in their inability to trust each other.

Om resents Dina’s sense of superiority over him and his uncle. An angry and proud young man, he will not allow himself to be taken advantage of or to be someone else’s servant. Ishvar tries in vain to encourage his nephew to keep his head down, avoid making trouble and to keep his temper in check, remembering all too well the fate of his brother, Om’s father, in their village. Dina is equally anxious that the tailors will desert her, find a better offer and leave her in the lurch. After making a good first impression, their work slacks off and Dina feels obliged to be tougher on them.

But their lives are now all mutually dependant. Only once they each open up about their pasts and the tragic circumstances they have escaped can they find understanding, trust and cooperation from each other. Together they can make a better future for all of them.

Their timing though is poor. In 1975 Indian Prime Minister Indira Gandhi declares a state of Internal Emergency. Neither Dina, Maneck, Om nor Ishvar are politically minded but the emergency threatens the precarious life they are attempting to make for themselves.

The reason Maneck sought Dina’s spare room at all was because the political disturbances on campus were making his life difficult there. The disappearance of his only friend still haunts him. The Emergency is also empowering Dina’s landlord to use goondas, thugs, to try and evict her.

Ishvar and Om are in the greatest danger. Currently living in a jhopdi, a shack in a city slum, they are a target of the Emergency measures. Slums are being destroyed, forced labour camps are being set up and mass sterilisation programs are rounding up victims.

Dina, Ishvar, Om and Maneck find that they are pawns in a much larger game they do not comprehend and their tenuous prosperity hangs in the balance.

A Fine Balance is Rohinton Mistry’s second novel following Such A Long Journey (review here). It was well received by critics and literature readers and like Such A Long Journey it also earned a shortlisting for the 1996 Booker Prize (ultimately won by Graham Swift’s Last Orders). It also has many factors in common with Such A Long Journey but is a far more polished work which shows Mistry’s maturation as a writer.

The first obvious parallel is that they are both set in India during the Emergency period of the mid-70’s. Although the city in A Fine Balance is not named, it is safe to call it a twin of Mistry’s native Bombay which was the setting of Such A Long Journey. The story of each novel concerns the lives of ordinary people at various levels of society being swept along by forces much larger than themselves. It is therefore, a very political novel.

But unlike Such A Long Journey, where several characters voice strong political opinions of varying types making the novel, not a polemic, but at least very plainspoken; in A Fine Balance, the main characters are apolitical and have no real comprehension of how such politics will affect them. Some outspoken minor characters share their political opinions, all in favour of the Emergency, but the main characters are mostly victims of the changes being made to their world. The political asides do not feel like deliberate inclusions that add nothing to the story as they did in Such A Long Journey. So, while it is no less political in message, the novel is far more subtle and indirect in delivering that message. Mistry explores not just the injustices of the era but the Orwellian, or Kafkaesque, ridiculousness of the Emergency measures.

Another parallel between the two novels is the conflict between fathers and sons over the son’s education and future career. In A Fine Balance, it also extends to conflict between pseudo-father (Dina’s brother) and Dina over her future. The generational conflict transcends religion and social class, so much so that it becomes something the low caste Om and the son from a wealthy family, Maneck, have in common in their budding friendship. The inability of these characters to choose their own future and path to happiness and fulfilment is an obvious criticism of Indian traditional values in both these novels. One wonders if there is a personal aspect to this recurring theme from Mistry’s life.

The greatest battle over tradition, though, is reserved for the history of Ishavr and Om’s family and their experience under an oppressive caste system. The system that has endured for centuries remains in play through the family’s experience of 20th century India; from Gandhi’s campaigns against untouchability, Indian independence and through to the Emergency era which rewards those with an oppressor’s zeal with positions of authority.

Though progress may help defeat unjust traditions, the novel also mentions the other side of progress. Untouched paradises spoiled by development. The filth, crime and poverty of the cities.

This was the second time I have read A Fine Balance. I liked it better the second time, now that I have also read Such A Long Journey and Salman Rushdie’s Midnight’s Children, it feels easier to give it a place among contemporary Indian literature and the author’s own evolution.

I liked the ‘local colour’, if I can call it that; the small details of ordinary, daily life as it enriches the novel. The backstory of Ishvar and Om’s family history in their village is one of the strongest sections, filled with events that will arouse horror, anger and sympathy. Equally so, their experiences in the city as the Emergency comes into effect.

It could have used more humour. It has much potential for it when the four main characters find themselves spending so much time together. Though, I thought the choice of names for Maneck’s family (Kohlah, and his mother’s maiden name – Sodawalla), who make soft drinks from a secret recipe, was a little silly.

I believe the novel has the feel of a 19th century Russian tragedy. If you like dark tragic novels with a social or political conscience like those of Dostoyevsky or Tolstoy, then I think you might enjoy A Fine Balance as a modern, post-colonial, equivalent. It explores the fate of disparate people of various socioeconomic levels caught up in a rapidly changing world, their inability to fight against it and the absence of the change they do need. When change is powerful and inevitable, it is impossible to fight against it. Trying to maintain a balance, between hope and despair, is the way to survive it.

See my reviews of other Rohinton Mistry novels; Such a Long Journey and Family Matters.