Six Books I Read But Did Not Review

Often you read a book and you either love it or loathe it and you can’t wait to tell everyone why. But sometimes it is difficult to know what to say – because you feel indifferent, unmoved, inarticulate, or because it has all been said before. Here are six books I read fairly recently but couldn’t say much about.

The Towers of Silence by Paul Scott

Having read and reviewed the first two novels of Paul Scott’s Raj Quartet (The Jewel in the Crown and The Day of the Scorpion), The Towers of Silence was next and represented a severe test of my abilities as a reader. The Towers of Silence is mostly a retelling of the events of the first two novels from other perspectives. But when you are in the third novel of a quadrilogy, having already read almost 1,000 pages, trying to understand and appreciate what, if anything, a new interpretation of previous events means, can really do your head in.

The Towers of Silence was my least favourite of the quartet and I am going to skip writing a review of it. I did go on to read the final novel, A Division of the Spoils, but even then I felt I needed time and a break to come to terms with it. I may watch the TV series and even re-read the final novel before writing it up. 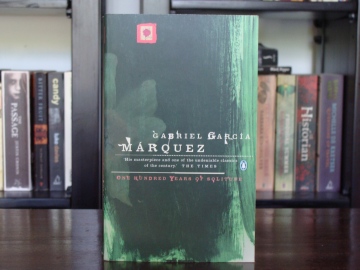 Though he had a long and distinguished career, Gabriel Garcia Marquez is best known in English for two novels, interestingly written almost twenty years apart, the second after receiving the Nobel; 100 Years of Solitude and Love in the Time of Cholera. I read Love in the Time of Cholera several years ago when anticipating the film, and have to admit I did not love it. Marquez warns against ‘falling into his trap’ and perhaps I did. I just found it too long and not engrossing enough.

I had higher expectations for 100 Years of Solitude, frequently cited as one of the 20th century’s best novels. Overall, I did enjoy it more, but again I did not love it and despite writing pages of notes I found very little to say about it.

The post-colonial and historical aspects – of the coexistence of different ethnic groups, prolonged guerrilla civil war, American commercial interests – were the most interesting for me, but these seemed relatively minor themes in the novel.

The circular story of family saga, each generation inheriting the eccentricities of the preceding generation and the consequences of their actions is one I have enjoyed in the past, for example, in Jeffrey Eugenides’ Middlesex and Salman Rushdie’s The Moor’s Last Sigh. Here it drags on too long and the second half of the novel was not as enjoyable as the first. There is a fair amount of foreshadowing in the first half of the novel but it concerns a second-generation character. So when the story moves on to third, fourth, fifth-generations and more, you feel as if the novel has also gone much further than Marquez originally envisioned.

I lumped these two novels together because my experience of them was similar. They are both short first novels from highly respected writers that I read close together a few years ago and just could not stand! When I began my blog I thought I might reread these. Even though I did not like them, I thought the reasons why might at least give me plenty of material for a review and since they are short I could read them quickly. However, despite their brevity, I could not bring myself to complete either of these novels again, such was my distaste for them.

Ishiguro is probably the one contemporary literary writer that I just do not understand the appeal of. I did like The Remains of the Day but was not overawed by it and, of the Booker Prize winners I have read, it is probably my least favourite. Never Let Me Go did not grab me either. A Pale View of Hills was the breaking point and despite his considerable acclaim I can’t afford to spend any more precious reading time on Ishiguro.

The White Castle, however, was my first taste of Nobel Prize winner Pamuk. It was not a pleasant introduction and, as I have his more acclaimed novels Snow and My Name is Red on my shelves, I hope it is not an indication of things to come. I like allegory and grand themes in novels but here the story and characters come a distant second and were not enough to maintain my interest. I maintain hope for better in his other works.

I struggled to enjoy this book and even now I am struggling to know what to say about it. When it comes to classic fiction, gothic novels have been among those I have most enjoyed (especially Frankenstein, Dracula and Jane Eyre) but the experience was not repeated here. As with any classic fiction, even if I did like it, it would be difficult to say anything about it that has not already been said. Like some of the books mentioned above, I probably just did not ‘get’ it and the themes I did understand were not enough to feed my enthusiasm for it. My expectations were probably spoiled by modern reproductions which suggested that the major theme of the story was the consequences of judging people on their appearance when in fact that is probably one of the minor themes in the original. Still, I would not be opposed to picking this up again in a few years’ time to give it another chance. A lesson I have learned from some other classics is that they can become favourites if you give the characters, themes and style another chance once liberated from the attention of the plot and your expectations.

I am unsure how Mordecai Richler’s Barney’s Version ended up on my shelves. On the surface it did not look like the sort of book I would gravitate towards – it did not seem particularly literary, nor destined to become a classic. As you can see, I purchased the movie-tie-in version of the book, which I normally loathe to do. It must have been as part of some special offer or deal tied to something else I bought.

Nevertheless I found it a very enjoyable and humorous read. There is something charming about the flawed older man, retelling a life full of mistakes and regret, trying to set the record straight. Naturally, you know better than to trust his narration. There is an air of High Fidelity, a story I love, in Barney’s tale of his three failed marriages. It is engaging and funny and life-affirming. Writers that can craft a story that makes you root for the deeply-flawed, morally-bankrupt protagonist are always worth a look. I am even tempted to discover more of Richler’s work.

I found the film to be very missable though. As much as I like Dustin Hoffman, he could never become the Izzy Panofsky of the novel. The film does seem to have been enjoyed well though; it may be one of those films where it helps to have not read the novel first.