Misery by Stephen King [A Review]

While I am not one of Stephen King’s greatest fans, Misery is top drawer entertainment and a pop-fiction classic. 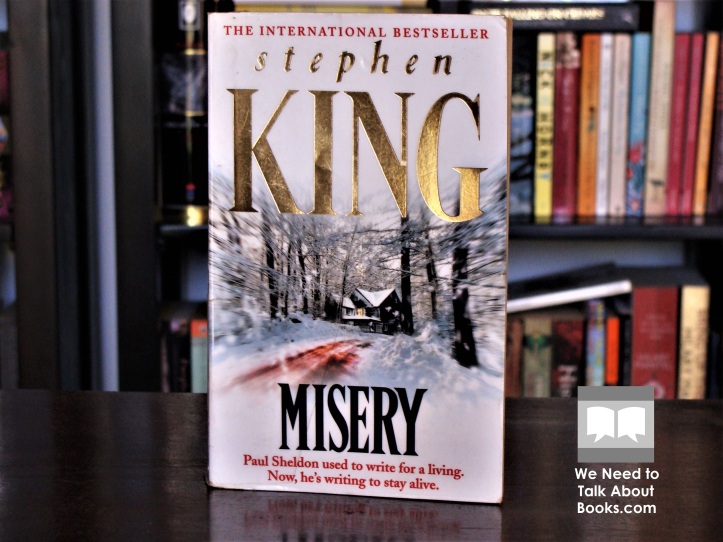 I seem to be a sucker for punishment when it comes to Stephen King. I have never loved his work and yet I keep coming back to him. To be fair, I have avoided the works that established his name, such as The Shining and Carrie. They were so deeply entrenched in pop culture – with the films, plus endless parodies, imitations and allusions – that it is hard for someone like myself, who grew up after their impact, to give them a fair go. My experience with King started in the 90’s with Needful Things. I hoped that, in Needful Things, King had produced something new for a new decade.

Although a good idea, Needful Things was a poor book. I took me about four attempts over several years before I finally finished it and it was hardly memorable after that. But it does capture all that I love and loath about King – on one hand he does have some great ideas and he certainly knows how to sell them, he builds intrigue like almost no one else can, but he also struggles to maintain that throughout the story. He often does not have a great idea to close the story to match the great idea of the premise. He is certainly not the only author to suffer from this, but to me King is too often the M Night Shyamalan of pop fiction.

But, despite continuing reluctance, I keep being tempted back to him. First to Salem’s Lot – it was simply referenced in too many songs and other books for me to ignore. Next to The Stand on the recommendation of my wife, who is a big Stephen King fan. Both books are good and I enjoyed them in parts. The Stand in particular stays interesting enough to keep turning the pages of what is a long novel, but again I can’t really say they rocked my world.

But always, in the back of my mind, there was Misery. Intrigue is what you might feel when you first read the blurbs for Jurassic Park or The Da Vinci Code without prior knowledge, but Misery is a different feeling altogether; completely off the charts. But given my history with King, would he let me down again?

You really can’t do better than the blurb in describing this book:

Misery Chastain was dead. Paul Sheldon had just killed her – with relief, with joy. Misery had made him a rich man, but she had also stifled his creativity, turned his work to drudgery. Now he was free to move into something altogether more satisfying. Paul Sheldon has every right to kill Misery, of course, since he had created her. She was the heroine of a string of bestselling books and he was tired of making up her adventures. Now he wanted to get down to some real writing.

And that is just what he was doing when the car accident happened – the accident which had left him paralysed and quaking with pain in a strange bed. Not a hospital bed, he realised when he woke up, because it was Annie Wilkes who had found his broken body and she had brought him to her own home, way out in the mountains.

I had thought about Misery for a long time, was fond of saying that if I ever went back to King again it would be for Misery and despite my previous disappointments I felt certain I would enjoy it. I found a second-hand copy of it a little while ago and took it with me on holiday. I have learned not to lean on literature while travelling – when you are tired and jet-lagged, you won’t keep your eyes open for highly literate writing no matter how great the quality. Instead you need action, suspense and intrigue.

Misery is a great book to carry on a trip. The intrigue is intense. The pace is well controlled. It is slow enough to keep you in suspense, but King rewards you frequently enough to not let you feel like he is just toying with you. Still, it is fast enough to keep the events of the story coming and the plot thickening. It is far more emotionally engaging than the other works of King’s I have read. You really feel Paul’s pain, fear, paranoia, desperation and depression. The emotion of King feeling pigeonholed as a horror writer and his battle with drink and dope comes through on the pages. The passion for the craft, the love of the method and the highs and lows of stuttering creativity also flow through.

My main criticism of this novel is that the allusions, metaphors and analogies are a little hit and miss. I liked the use of the pilings that become submerged at high tide and exposed at low tide for the way Paul’s considerable pain comes and goes as the drugs take and lose effect. I liked Paul comparing himself to Scheherazade or to the confined African bird from childhood memory. But referring to his competing physical needs – hunger, thirst and pain relief – as competing racehorses, complete with dialogue from racing commentators, was off the mark and pretty kitsch. And without giving away a spoiler, I didn’t like how Paul’s final confrontation with Annie turned out to be a bit of a cheat. It lacked the true commitment of someone willing to risk death for the chance of life. Paul does not risk everything and so a certain edge is missing.

Altogether though, this was a highly entertaining read and is easily my favourite King. After reading it, my opinion of him is less in the balance and more securely in his favour. While I will always prefer more literary works, I have plenty of time for a well-crafted, pop-fiction novel like Jurassic Park or Shantaram, and Misery joins them as one of my favourites of the genre.